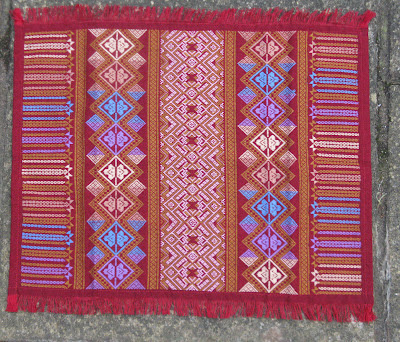 I may not have blogged much recently but I have been very busy. On Tuesday I went to London and first met up with a Burmese friend who gave a great package of textile goodies from Burma. This is my favorite (though they are all lovely). He says that the Burmese have not learnt about tourists yet so most fabrics are for sale to the Burmese. It is of cotton. 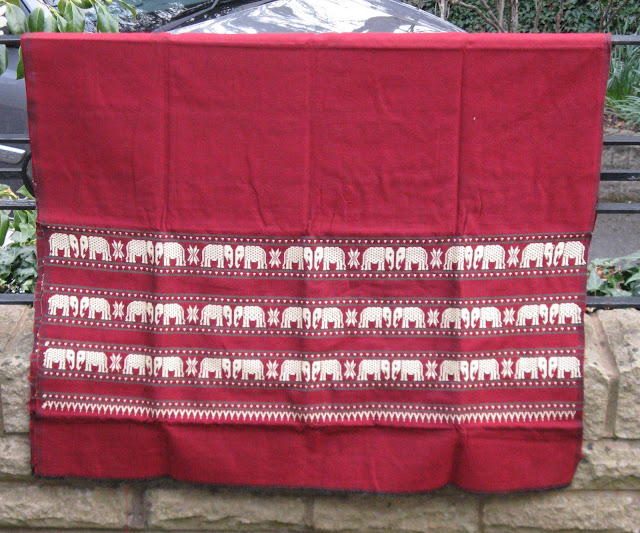 This is a long cotton piece with a woven pattern of elephants at each end. I shall use this as a table cloth. 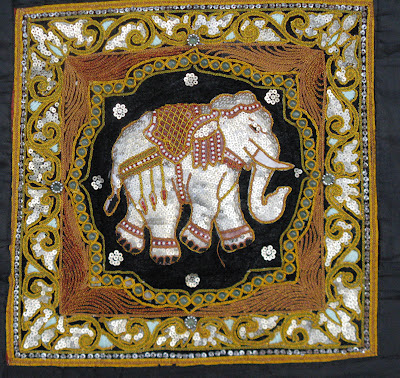 And here is another elephant! Done completely in sequins and gold cord! It would make a good cushion cover when I have the window seats installed in the studio. The elephant himself is padded so he is 3D.

This is woven cotton from North Burma. I have these all pinned up in the studio so that I can admire them from the seat of the Megado.
As far as my own weaving is concerned, it has been nothing but trouble. I went over to Leamington Spa last weekend to look after my grandchildren and took the Voyager, a raddle and everything else needed to warp up for a major guild project. The problem was that I had wound the warp in bundles which were too big for the Louet raddle. The warp was awful by the time I had it wound on. So I threaded up and sleyed - and then pulled out eight of the twenty foot warp and re-wound which was much more tedious than it sounds but resulted in a lovely tidy and smooth  warp. I was back home by Sunday night. By Monday evening I had woven a six foot length, cut it off , pulled out another eight feet and sorted that out. It now has to go to someone else to weave up and is ready for Saturday. Much of the weekend was spent taxiing children to ride horses and have music lessons. But we did go for a walk in some woods and I took them to paint pottery on a very wet Sunday afternoon.
Returning to Tuesday, Rosie Price, Debbie Richardson and I met up in the V&A and we viewed the exhibition of the Golden Orb spider. Some enthusiasts set up a system in Madagascar to collect the thread from Golden Orb spiders and weave it. There were two pieces , a shawl which must have been three foot by eight and a cape. The cape was woven in tabby and then richly embroidered with the same silk which is a uniform fantastic gold. The shawl was woven in a secondary weft/pickup pattern. They also displayed a traditional multicolored shawl woven in the same patterns. It is a wonderful display. I wonder what is going to happen to these two pieces.
We looked ast a special exhibition of Japanese cloisonee at the V&A. Again wonderful. Then it was off to the Royal Academy to see the Hockney again. The queue snaked all the way across the Burlington House courtyard. But we had tickets so just walked in. Crowded - but worth it.
By teh end, we were all exhibitioned out so sat in the Friends Room at the RA and organised the world. Well our bit of it.
The textile bit of my life is not going well. I am off to Australia next week and have to ship out samples of Diversified Plain Weave before I go. I have woven one pattern on the Megado and decided it would not do at 15 epi. I even tried replacing the thin weft thread with 60/2 silk but it did  not improve. I replaced the reed and resleyed at 12 epi and should be weaving this morning.
In addition I am planning to put in a number of textile pieces to the Midlands Textile Forum's Exhibition in the Bullring, Birmingham. These all have to be delivered  next week. And the sewing machine gave up the ghost!! Panic in all directions.  It will go in to be serviced on Friday (tomorrow) and I am picking up another machine at the same time.
In all of this, I should be checking that I have done everything for Australia!!! But I have not - yet.
Posted by Pat at 07:42