I drove down from Dundee on Tuesday. It was not my lucky day as I started out at 0615 and 30 minutes later had a serious puncture. The AA turned up quite quickly and put on the spare tyre which turned out to be a temporary measure and the AA man was adamant that I could not drive 400 miles to Malvern on that tyre even at 45 mph. So I ended up in Stirling buying a new tyre. Got home at 1515 feeling ill-used. I did unpack the car but that was about it. 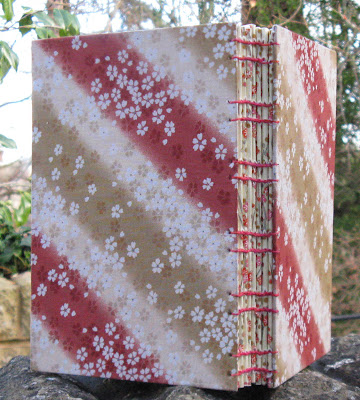 On Wednesday I went to my bookbinding class and finished off this Coptic binding. I had done about 60% of it before Christmas. This is done with a two-needle sewing method and I have more or less standardised on this.  Each one comes out better than the last. 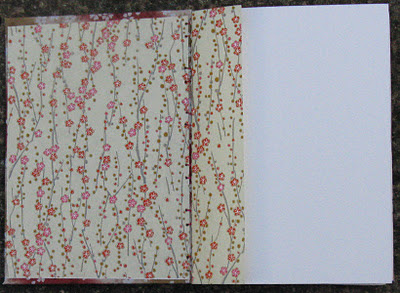 This is the inside, showing the end-paper and the guard papers round each section which were cut from the same Japanese paper sheet. The thread for the binding is Oliver Twist silk - slightly variegated.

All the examples I have done recently have been A5 portrait and I decided to do a little one. That is all prepared, paper folded, covers made. The guard-papers are rainbow coloured. The covers are of cotton dyed by me. The endpapers are Japanese. The sewing will be done in black Como silk. It is 4 inches square and was made from odds and ends of paper lying around.

Today has been spent, catching up with post which means paying bills, phoning up tradesmen and filing everything away. I have not quite finished but only have one phonecall and one letter to do. Then it is putting buttons on the waistcoat. The buttons have been selected from the button stash and I have some material to practise on.

The good news is that, when I visited the optician this morning, she says my eyes are very nearly alright. They were far from it in December and I have been following a course of treatment. Nothing life threatening just dry and painful eyes. So I have to keep up this regime for the rest of my life.
Posted by Pat at 14:44