The Guild Spring Weaving Course started yesterday. There are six 'improvers' doing 'patterning' and five total beginners. I was too busy to say much to the beginners. The improvers are doing things like Summer and Winter and Diversified Plain Weave. So there will be leaves and flowers and trees! One is working in silk noil and one in cottolin but the others in cotton.  Yesterday was spent warping up, sorting out selvedges and generally discussing things. By next Saturday, they should all be weaving.
I have resleyed the 12 shaft loom to 10 dents per inch. All I have to do now is to wind the whole warp forward, get rid of the excess warp yarn (I have gone from nine repeats to six repeats) and wind back again!! Sooner or later I will get this right.
At the Bournville class, the theme for this session is Word and Image. The tutor handed out paper bags of stuff which we were not to look at until we got home. It contains a selection of fabrics and a four inch backing square and we all picked one or two words (again supplied). So now I have to make something from this. Investigation of the brown paperbag dismayed me. I have had a quick go but my initial ideas were no good. One problem is that I am not used to working on such a small scale. I have 2 weeks to do this!! 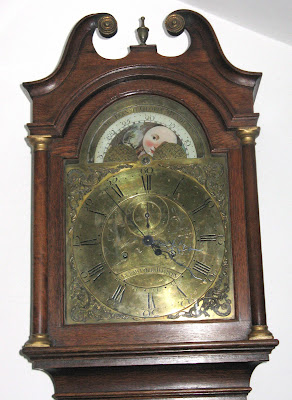 The clockmaker came on Friday, bringing back Ruth's clock. He spent quite a bit of time preparing a level patch. We ended up with a piece of mahogany from the cellar cut to size. It is now installed and looks good. The phases of the Moon dial has been totally repainted (see  newly painted clock face here) and looks good. The striking bell had been broken and that has been replaced with a newly cast bell. It does not sound quite so sweet as the original but that may be my imagination.

Today is Indigo Day. I have a five gallon drum from the Newbury Coat but just in case, I had up a new batch of indigo solution last night. I have lots of yarn to dye for other people and I am aiming to start my dyeing before everyone comes and get mine out of the way.
Posted by Pat at 07:34