I have created several fancy twills on 8 shafts. They are all quite pleasing, provided you get the right colours in warp and weft. All drafts have a point twill in warp and weft, what changes is the tie up. I decided that I could do several and have set out on that project. The space dyed warp has been mounted on the Schacht and It have started out on one draft. There is enough to weave two scarves with the current warp. (The white tape in lower left is my measuring tape). When I have finished this brown scarve, I will do another one in dark red. Then I will wind an warp ad tie it on, change the tie-up and weave a difernet draft. Do not ask what I am going to do with all these scarves. Keep them till next Christmas? 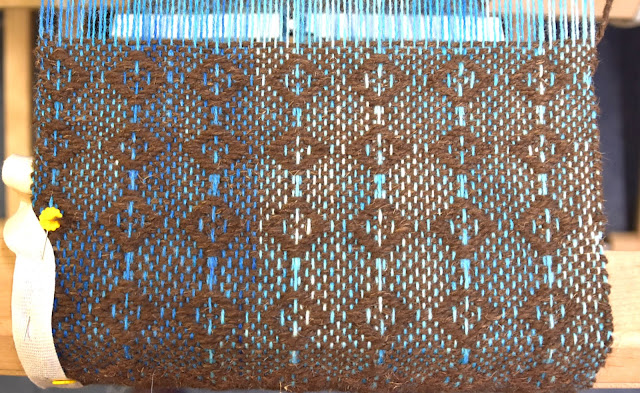 And now is the time to relate why Jerry is not speaking to me! On Friday I was cutting lino block which involved the use of a roll of tracing paper. This lives in the box it came in. I used the paper and put the box and the roll on a table next to me. Jerry had it down in a flash but I confiscated it and put it far back on the same table. Now Jerry if he stands on his back feet is not big enough to see what on the table. But he is if he jumps and he spent the next 15 minutes jumping vertically and whining. End of story for Friday. On Saturday I was back in that room and he immediately started jumping and whining and then he gave an almighty jump swiped his left paw across the table top and knocked the box to the carpet. Then turned to find I had got there first. So it is now visible and on a very high shelf and he sits and gazes at it.