We took over the allotment a month ago but have not even visited it since the first photo. 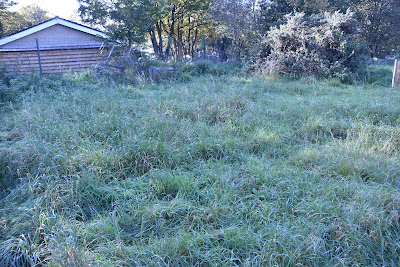 I am realistic enough to know that, if I cleaned up the grass and prepared the soil for planting, I would be very slow and would probably do damage to me> So We got the gardeners to come in for the day and I met them there at 0800 hours this morning. It was bitterly cold. I drove in stakes to mark things out , explained it all and left for a warmer spot. When I return at 1100, the grass was gone, only as far as an immense heap at the end of the allotment. 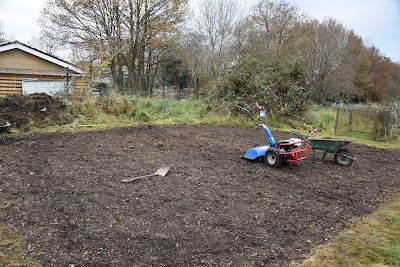 Taken from much the same spot as the first photo. You can see the heap of turf in front of the Scout hut at the top left. They rotated it several times then added a trailer full of mushroom compost and incorporated that. 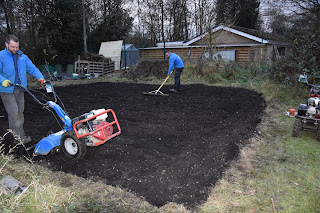 You can see how dark the soil is with the mushroom compost included. When I left, they had laid down some of the central path. We found we had 35 paving slabs looking for a good home since we had the whole of the front paved. So these have been used. Any plant is going to be happy to reside there. I have ordered cordons of pears, apples, one greengage and one cherry and several soft fruit bushes. I have the raspberries already, carefully put into very large pots so they can be easily transported. I will plant them next week. I gloat.

And while all this was going on, we had someone in my studio, ripping out walls, taking off doors and then making good. It is all ready for next week when they come to install the new storage.  It is very awkward having everything wrapped in plastic, limits what I can do.