Ally Pally and all that

The Knitting and stitching show is always held at Alexandra Palace (= Ally Pally) in north London. I went once many years ago and the journey there was horrendous so I refused Dorothy when she said she wanted to go, would I come too. But she persisted and found a coach going from Maidenhead for the day. So on Sunday I was out of bed at 0630. I have to admit it did work. We went with a long list and got most things on the list. Nothing very exciting, bobbin holders and the like. When it says Stitching, it means embroidery and one the best exhibitions was a student show where I even bought some bits of embroidery - owls to paste onto the front of a book as a Christmas present for my youngest grandson.m

Yesterday was spent traipsing into Reading hospital and back. So today has to be devoted to gardening as the garden is not quite ready for the builders on Thursday. I need to move a load of plants from the area where they are putting in steps. I have taken some photos of what it looks like now for a before and after comparison. 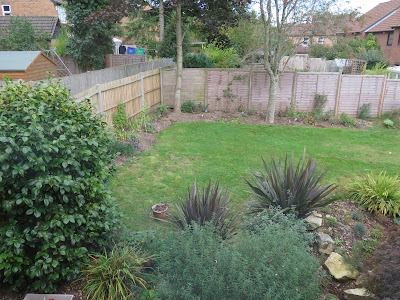 A small patio goes in the top left hand corner. There is a set of steps going up from the bottom centre between the two phormiums. These are being widened and the rockery on the right will be pushed back.

I have been busy thinking about textiles. Next weekend is the Guild Weekend Retreat and I am going on a course entitled 'Design for the Terrified'. The materials list is long and baffling. I am supposed to take appropriate equipment for my chosen craft. If I do not know what I am going to do, how can I warp up before hand? And I hardly want to warp up the 12 shaft Meyer there. It would take too much time. So I scrabbled about in the studio until I had found a Weavette. And I have put a load of yarn that I cannot think what to do with in a plastic crate. The spare room is filling up with stuff to be taken. I still have to find a few things.

I had a major triumph yesterday in that two different web outfits charged me with one of these automatic annual charges. One was a security outfit where I intended to cancel the subscription and they took the money four weeks before it was due for renewal, thus not giving me time to cancel so I pointed out they were being illegal and I wanted my money back - and got it. The other was similar but I had left it a bit late so I suggested they take a month's rental and give me back 11 month's dues. They refunded the lot. Mind you it all took hours. And just for the record, because they hide these things well on their websites, you can get at them through your credit/debit card services. They will cancel an automatic subscription if ask them.if asked.
Posted by Pat at 05:39