A new project or two

I finished off the rather garish scarf I have been weaving. It is mended and fringed but not washed. I have worked out the numbers for the Hampshire handspun and can get 5.5 metres out of it. So I will wind the warp tomorrow. 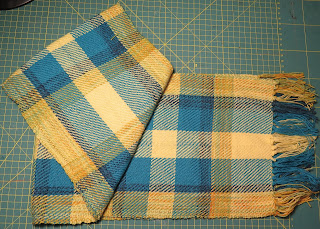 The other project involved mucking about with Photoshop, making this year's Christmas card. I created a Lino cut at West Dean this summer. It was scanned in and text added and the layout organised to print two cards. The inside was similarly organised and printed on the back so all I have to do is to use the guillotine and fold the two cards. I have a large number to print. 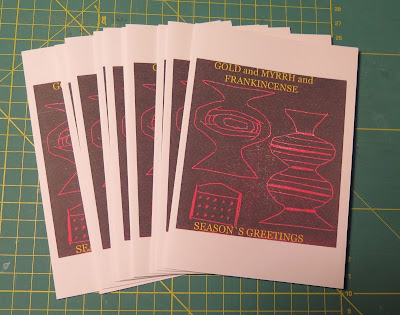 I have been doing a lot of gardening. Some of it explained by the garden needing attention but some is due to the builders moving in next week. We are having work done in the garden, laying a small patio where the garden catches most sun, widening the steps up to the garden from 3 ft to 6 ft and installing a bannister on one side. Also removing a large tree from the rockery and relaying the rockery which means putting the large stones back in the places they have fallen from. And digging one complete border and replacing the soil. So my job is move everything worth keeping from the scene of operations and plant the plants elsewhere. All the preparation has been done. If the weather forecast is correct, it will be sunny tomorrow and I will get the replanting completed. Gardening always improves my temper. Something to do with seeing results immediately.
Posted by Pat at 20:03