We finished at West Dean this afternoon and came home collecting the dogs on the way. The car was very crammed with all the art stuff, two dogs, two people and their luggage and the car laboured going up hills.
The last two days have been very hard work. Which was all my fault. I have been thinking about a poem The Makar's Lament for some years and have actually set about it twice. I cannot even remember the first trial. The second trial was in April when I cut a load of linocuts, then destroyed the lot - deliberately lest any of you should think it was by accident. The trouble was that the last one I did had a recognisable story and it was easy to find an image to use with every pair of verses. The Lament is philosophical and about death and basically you need a skull on every page. I did not come with any idea of doing a third trial. In fact I had mentally abandoned that until yesterday morning. The tutor gave a demo of using two related blocks and with different colours on each you can get all sorts of colour effect. My idea (a Eureka moment) was that if I cut two quite different blocks, I could print them in all sorts of colours and used a coloured background, I could get a series of related images which could be used with every pair of verses. After working flat out from Thursday morning to Friday at 1100 am, I made 27 different images and I only need 13!! I am chuffed to bits. 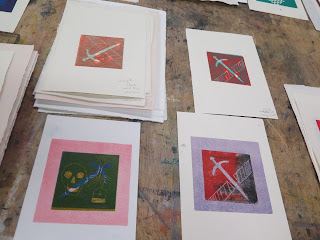 Here are a few of the images. 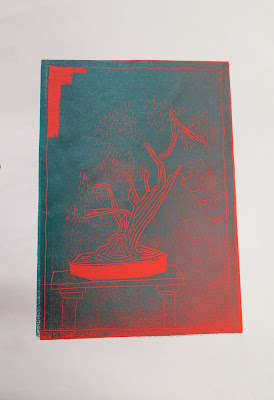 And here is one I did previously

This weekend apart from having a weaving Study Day tomorrow, I must pack for Convergence. I leave on Monday. I need to find time to do the monthly accounts and plant some plants which we seem to have acquired. 3 fuschias, a rudbeckia and a sempervivum. Our sweetpeas are spectacular. I have never grown them successfully and here they are, producing a goodsized bunch of flowers every day. I note the purple French beans are ready too, Have I said we are eating our own potatoes?
Posted by Pat at 22:57