The last week has been fraught. I was hacked. Lots of innocent people got an incomprehensible email purporting to come from me, Google spotted the problem, shut down my email and blog and got rid of my contact list. At the same time I went off to Antwerp on a long planned visit with a group of bookbinders. To finish this story, I set to today (first day back) and regained control of everything - but it took several hours!!!

On Wednesday, Most of us travelled by Eurostar to Brussels and then on to Antwerp. On Thursday we all went round to the Plantin-Moretus Museum where we had a conducted tour round the place and then stayed on to look at more things. It is fundamentally a 16th century printing works of one of the famous early printers. And it remained like that for centuries. Eventually the city bought it and turned it into a museum. It is now on the UNESCO list of culturally important establishments.

The books they printed were the high class ones 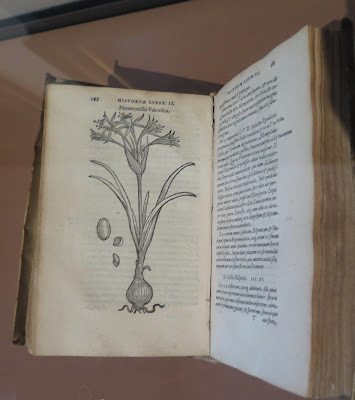 A first edition of Clusius. 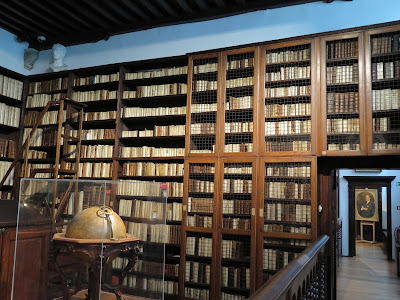 One of the libraries. They had everything there into a foundry for casting type. 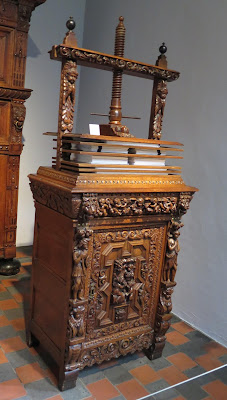 And this is a linen press from Rubens house. I always thought a linen press was a cupboard (the word press means cupboard in Lallans) but no it is literally a press. He was very wealthy. Lots of Roman sculpture and other famous artists' work. The house is very well appointed as can be seen from the garden below. 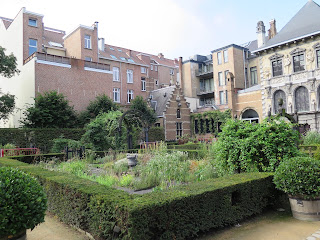 Rubens house is the right hand bit and that is less than half the house.
I came back in the Eurostar and this morning set out for Burghfield Common to take possession of the house keys. It's ours at last!!! Dorothy's stuff arrives on Tuesday and mine will be coming along later.  And di I say I have replaced the Ford Mondeo with a smaller Bmax.
Posted by Pat at 17:28