I managed to extract a courtesy car from the insurance company, a Toyota Yaris of which more later. This was done early on Thursday morning. By 11, I was at my daughter's house near Heathrow and by 1230 eating in Yo Sushi at Waterloo Station. Then we went to the National Portrait Gallery to see the David Bailey exhibition. I like his black and white portraits but not his coloured photos. Too garish. Then to dinner at Covent Garden Opera House, then to see Turandot. It was a production  I had seen before but of course, all the singers were different. A very good evening which ended taking the train back to Englefield Green and going to bed well after midnight. Friday some of use walked into Windsor Great Park and visited Savill Gardens. In the afternoon, I drove to stay with Rosie at Reading, then on Saturday morning to Newbury to the weaving class.

Which is where comments on the Yaris become blasphemous. A student brought my Voyager back - and I could not get it into the boot. We had to unbolt lots of it until it eventually fitted in the Passenger well. So the Yaris is no good for a weaver carting two or three looms about as a matter of course. 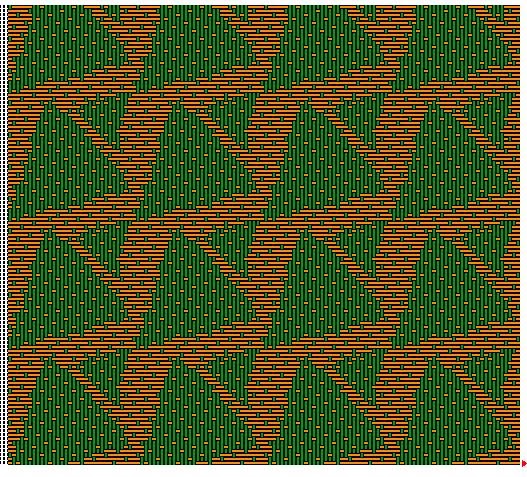 I was preparing the Shuttle (Guild Newsletter) for the printer earlier this week when I realised that the Guild Challenge for March is 'Triangles' and that I have not entered anything for the Challenge for at least six months. I do have quite a bit of warp left on the Megado and created a draft (see above) which I will weave up before next Saturday. If I have enough fabric, I will turn this into a bag for the National Exhibition - but maybe not by next Saturday! Now off to check through the Shuttle and send it to the printer.