The Voyager has been warped up and I have woven a small set of samples on it. 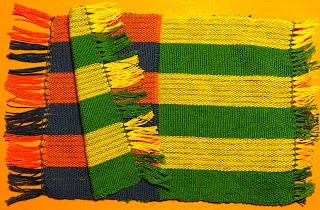 Five in fact. Two of separate cloths, two tubes and one with a join down one selvedge. On the loom there is a stitched double cloth and the start of a warp and weft interchange sample. So I am all ready to weave samples at the Guild Exhibition tomorrow. I will take lots of photos and post a few when I get back.

Now I must go and lay out clothes to pack for tomorrow ready for going to Vienna on Saturday. I remembered to go out this afternoon and buy a black sweater and an airline bag which is a replacement for a scruffy canvas shoulder object with American Airlines written on it. A freeby from 30 years ago when an airline was an airline, by gad. The shoulder strap disintegrated on me 18 months ago and I have not been happy without it. It is for the iPad, magazines and books to read and shoving last minute presents in it bought in airports. It is much posher than the airline bag but I wonder if it will last 30 years.

Talking of lots of years, last night I had dinner in a Cheltenham hotel to celebrate a friend's election to the Royal Academy of Engineers. People I had not seen for years were there, including one I met first 40 years ago. I can remember his marriage and meeting his young son who is now studying string theory for his PhD. He himself is an eminent professor in London now. The group was a collection of academics and business people with one thing in common. We all worked on the same kind of scientific spacecraft! Because of looking after Michael, I have dropped out of the engineering/physics world and do not keep up. On the drive home at midnight I decided I ought to. I might subscribe to Scientific American as a start. I don't read the journal sent to me by the Electrical Engineering lot (rather boring but then I was always halfway between physics and engineering) but I do read with great care the Journal of Royal Academy of Engineering. Oddly enough I recently had a missive from the Institute of Physics wanting me to take part in some shenanigans which I declined.

I am halfway through reading Penelope Lively's new book 'Ammonites and Leaping Fish' which is about growing old, well sort of. The combination of these two events is unsettling. Do I have to stay at home and do textiles? Suddenly I have itchy feet. Perhaps I should relocate to Arizona and run a diner in the desert.

A long time ago, British Aerospace sent me to SouthWest America, in particular to Arizona. I was enchanted, the desert was in flower. I scandalised the Company management when I got home and they asked how I got on. I think they were thinking of  'have you brought a contract home'. I said 'God has promised me that, if I am very good, when I die, I can go live in Arizona'. An enormous number of people still quote that back at me. Actually I did bring a contract home.
Posted by Pat at 22:06