The Textile Museum is housed in a Moorish style building built in 1896 to house the administration of the railways. Rather spectacular and very un-Malaysian or even British Raj. 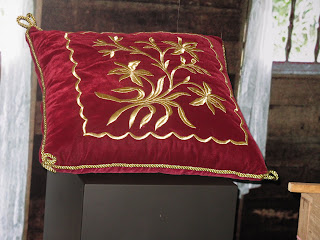 The most important gallery is one called Technology which deals with 15 different types of Textile and displays the creation of these types extremely well. In addition there is an interactive system where the technique is described while craftsmen carry out the process. Not all the techniques are covered here. I have ignored all the embroidery and beading techniques except one which is rather spectacular and much used today. In this, a complex pattern is created and drawn on card. This is then carefully cut out and fastened with pins to a piece of heavy silk under tension (similar to an embroidery hoop). The card is then embroidered over with metallic gold thread in satin stitch. The result is that the embroidery stands off the silk. Photo of red velvet cushion above. 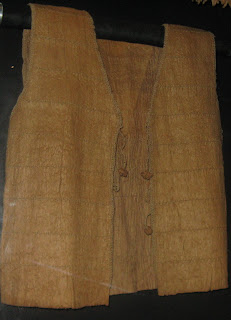 An ancient type of textile was created from bark which was soaked in water and beaten until softer. It can not be sewn into complex garments and the only examples I have seen are jackets which look very uncomfortable. 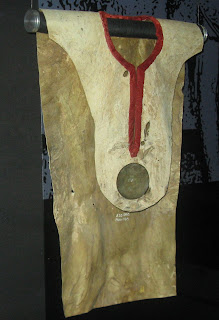 Similar styles of jacket are found in animal hide although these are often decorated and look more comfortable. Neither type is worn much these days except for ritual purposes. 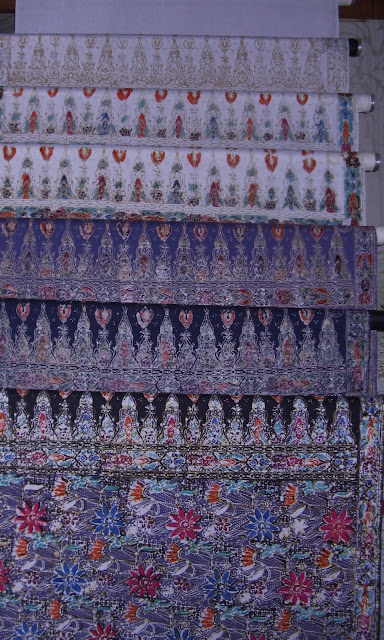 Two very good sections on batik are on show, one hand-drawn and the other stamped. The displays show the cloth at each stage- see left and below.
For example, in the stamping process, a tjag or chop is used to print an all over pattern in wax. The cloth is soaked in salt solution and then coloured. This process is repeated with another stamp. If a crackle finish is wanted, caustic soda is used. Note that the wax is not removed between dyeings. At the end, the cloth is boiled and rinsed which limits the technique to cotton. Most examples in the gallery and for sale in the markets have coloured backgrounds, red or black. The museum does show two pieces which have a white background and both pieces are from the 1930s.
Silk is used as with silk painting in the West,. The pattern is drawn on with a tjanting . Special dyes are used and can be heat fixed with an iron at the end. 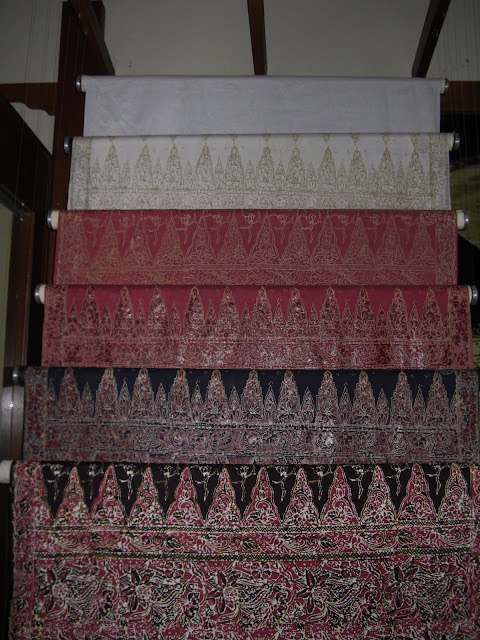 Tie dye or shibori is used in a standard way but the example shown was not a finished piece but a scrap of cotton with a few experiments on it. I have not seen anything like tie dye in the shops while all the other techniques are available. 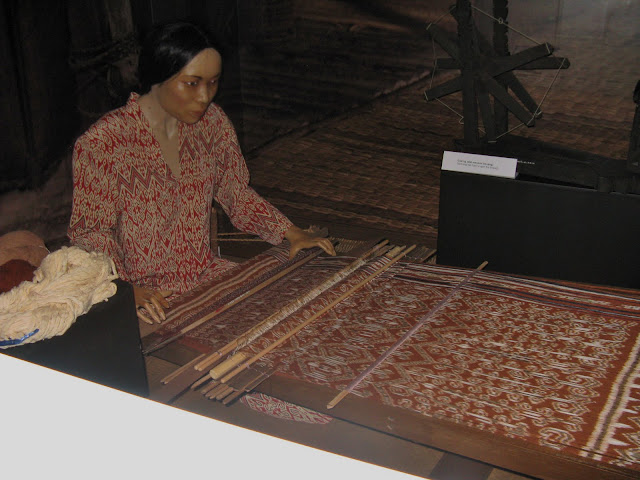 Turning to weaving, there is a display on the ancient technique of weaving on a back-strap loom. This is done in cotton with a plain cotton warp which was been starched and a tie dyed weft of extranordinary complexity. As can be seen above,  the finished piece is highly decorated. This is ‘Pua Kumbu’ and the cloth is needed for religious purposes. The colours are black, red and white, achieved by using a natural dye for the red and then indigo to obtain black. This comes from Sarawak, not main land Malaysia. 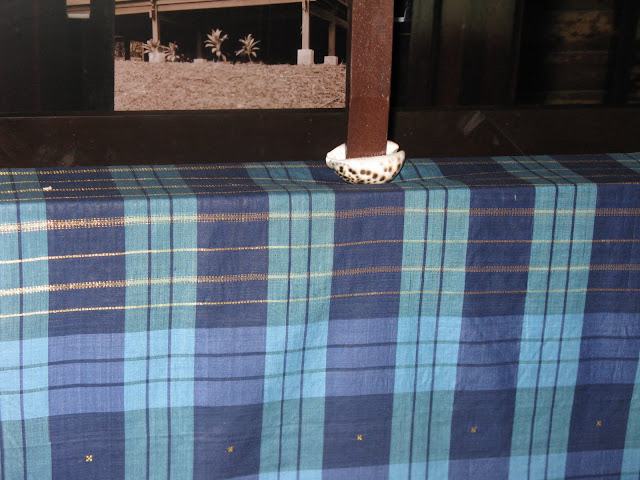 Fine cotton, striped and checked is woven. This is very attractive and is made more so in some pieces by a special treatment. The woven cotton is starched and then polished with a cowrie shell. When the whole has been polished, it is stamped with glue in a pattern of motifs, say flowers. When stamping is completed, gold foil is applied and the excess brushed off. This produces a beautiful cloth but it is impossible to wash and the glued-on gold foil is very fragile. 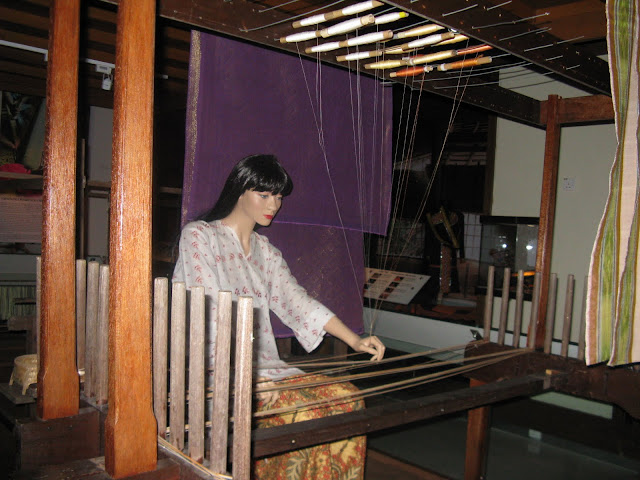 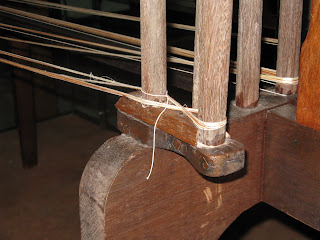 Lastly songket. This is silk and gold thread woven on a type of draw loom. The silk warp is wound on a warping frame (above and left)  mounted horizontally with the bobbins mounted on rods above the warper's head and the wound warp has a cross at one end. 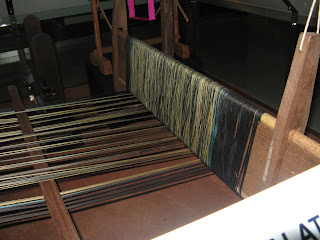 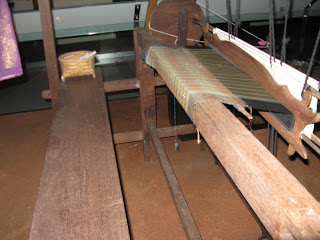 The loom has two shafts only and a reed. Although not shown on the displayed loom, the video demonstrated that the heddles were sometimes arranged in bundles according to the pattern required and these bundles were pulled up when required somewhat like a draw loom. I have seen several songket looms and none of them has used this method. They use a series of sticks instead. The weaving is done with a tabby silk weft and the pattern gold thread. This is a very labour-intensive process and songket is very expensive. There is a shop on the second floor of the Central Market which sells songket, Songket Sutera Asil, M53. He sells the woven cotton, as well as the form decorated with gold leaf.

This is the piece woven on the loom above. Three other pieces in the museum are shown below. I have not seen anything as complex as these for sale. Mostly the items for sale are stoles with a pattern at each end and a very simple pattern on the edges. But I am sure you could order a piece as complex as these because you see photos in the newspapers with politicians wearing a songket stole on grand occasions. 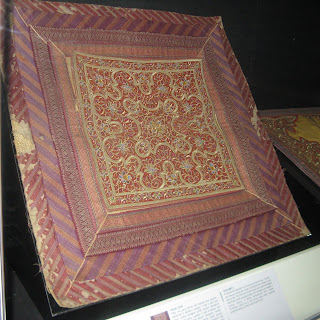 The next three photos were taken in the general gallery and at an angle to avoid the light reflections from the glass cases. 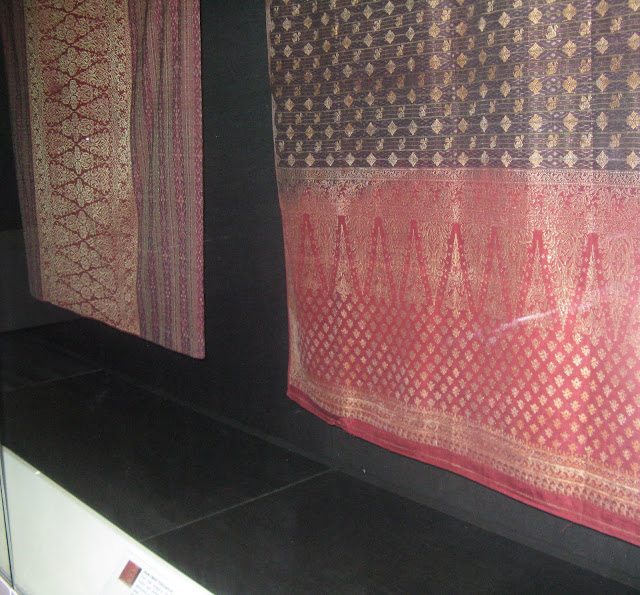 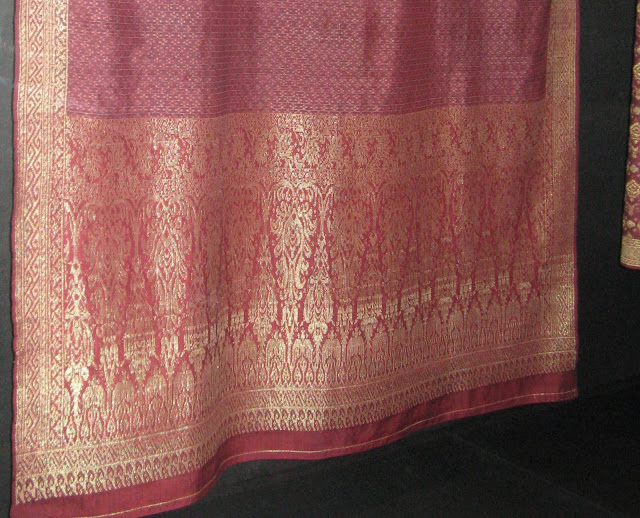 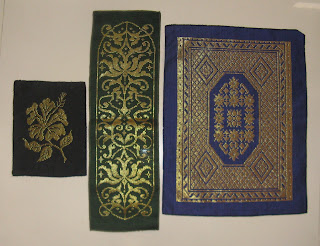 Decorative pieces of songket I bought. The seller had items like this framed with gold mountboard and a plain wood  frame on his wall and I intend to do the same when I get round to it.  Two are for presents. 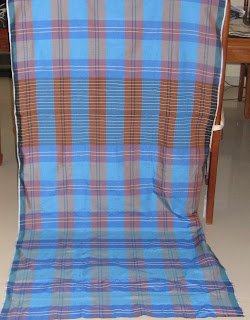 A piece of cotton bought from the same shop in Central Market. Note that the pattern does not repeat. The length is intended to wrap round you and this different bit in the middle would be on display. 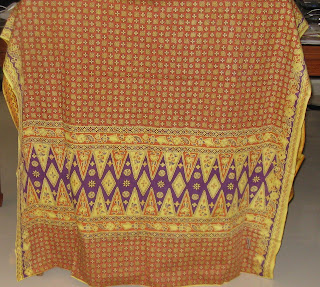 And a piece of stamped batik bought from the Textile Museum.

So that is the Textile Museum in KL. There is lots more to say about the last bit of the holiday spent on  a very grand island resort - but that can wait till I am home. I fly out of KL in six hours time and have yet to pack. I am dismayed to find that I have bought an awful lot of books which will  have to come over with Robin in two weeks time. I have bought  a wonderful weaving book in Japanese. One can admire the photos though which are quite informative.