On Saturday, Robin and I got up really early and got to the National Palace Museum at 0815!! The objective was a scroll painting which is very famous and is on show there When we were there earlier in the week, it had been a 90 minute wait so we thought we might beat this by an early arrival. There was a large queue but the wait was only 15 minutes. Worth seeing. Then to see the one textile I had tracked down -  a piece of silk embroidery 6 ft high by 4 ft wide. It was very under-lit and impossible to see the top half but they had put up a lot of blown-up photos which were very good. Then to look at the book binding. At which point we decided that we really needed breakfast!!
Then, surprise, surprise, we went to a Mucha exhibition in an adjacent hall. This was well labelled and very informative and so very enjoyable. I resisted the temptation to buy a Mucha book in Chinese but bought some postcards.

After that it was lunch, taxi to the airport and  flight back to KL. The usual ennui-inducing process. We got back from Taiwan at 10 pm and all slept well!!!


Today (Sunday) was devoted to finding and buying tjaps for Dorothy which was very exciting. I started at the Kraft Komplex with the man from whom I had  previously (2.5 years ago) bought a  batik of hornbills as I thought he would be helpful. He was. I bought several tjangings.Then I asked about tjaps - and he knew about them and had four for sale. These are made of metal and intended for all over batik patterns. They are used as wood-blocks are. You dip them in the hot wax and stamp the wax on your cloth. They were all border patterns but very lovely although large. I have bought one which is about 8 inch long and four inches wide. In other words you get a border 4 inches wide. It has clearly been used before. He called them 'blocks' or 'chaps'. The advantage of buying from him is that he gave me careful instructions on how to use it.
Later in the day, after bartering for fake designer bags in China town market, Robin took me to an antique dealer in the Central Market with an incredibly crowded junk shop. But when I asked for 'blocks or chaps for batik', she said 'batik chops' and dived under the lowest shelf to produce some gorgeous individual patterns, not borders. I ended up with a bird about 12 inches by 8 and a lovely flower about 3 inches square. These are all copper. The border one is very dense and so is the flower but the bird is much more open. They are all of copper. 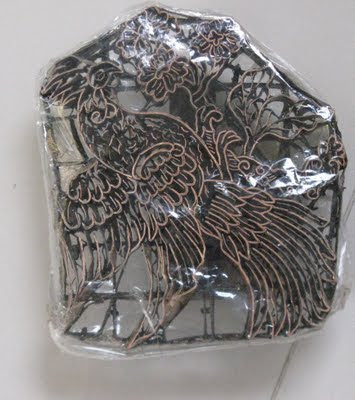 So as I said very exciting!! I only hope Dorothy likes them and can use them. The bird is still wrapped in plastic.

I have downloaded all my photos but decided to be very very selective.- see below. 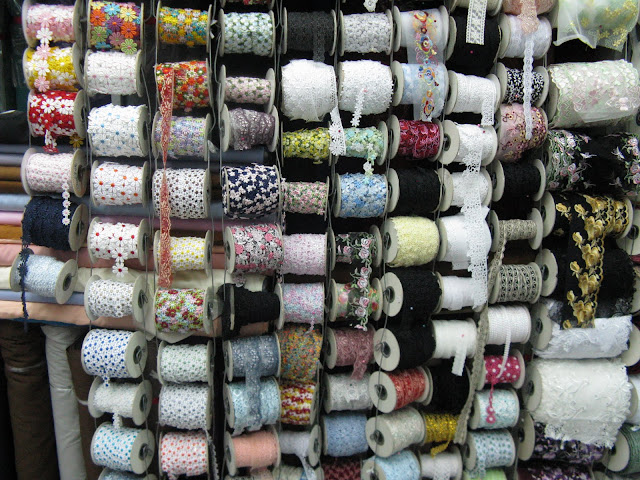 This is about half the stock in the ribbon shop. I bought 5 different lots of 2 yards each for less than a fiver. 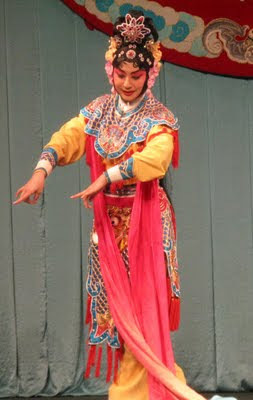 This is the Celestial Carp who sang, danced and did acrobatic. I don't know about the singing but the dancing and acrobatics were wonderful. Costumes were pretty good too. 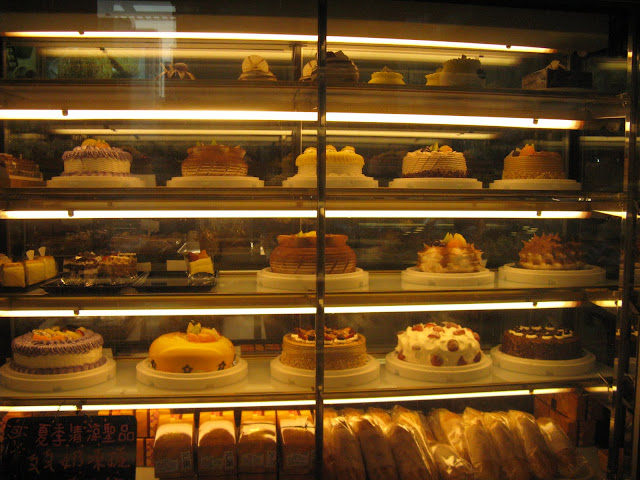 Last but not least, a typical cake shop. I forgot to say that the Taiwanese are crazy about bakeries. Their croissants are equal to French ones. Most bakeries sell several sorts of bread (european) and also sell hot and cold drinks so that at 0830 am, the bakeries are full of people going to their office and buying a hot drink and two croissants. As for cakes, they are everywhere. Danish pastries are popular and various developments of them with bacon and garlic instead of cinnoman and brown sugar. Very odd.
Would I go back to Taiwan? Yes I love it. Next time I would go to the Northern coast where the rocky scenery is very fine - and the fish cooking is said to be something special!!

Tomorrow I am going  back to the Textile Museum to take detailed notes. On Tuesday we are off again!! This time to an island not far away where we are supposed to be resting - I'll believe that when I see it. I expect it includes a rapid trot round the island in the midday sun.
Posted by Pat at 10:52