Last time I blogged, I was saying that the Megado was about to be brought into use. The last time I wove on it was October 2018. Since then I was ill for 6 months, then took some more months to get better while coping with getting the Jeremiah Fielding book printed and on the market. Well, the Megado does not work. It was quite adamant about this. It does not work. My first thought was the device to get a serial port speaking to a modern day computer. And I got in an expert but he thought that bit was fine. So I turned to the unthinkable - the Louet itself. And suddenly realised that when I switched it on, there was no satisfying loud Clunk. Eventually, after consulting Cally Booker, I called Handweavers Studio and talked to Alan who was most helpful. So I have to take off the side of the relay box and check the power supply. After all, I bought it in 2004 so it is a bit elderly. I can manage this operation/inspection myself BUT on Thursday I managed to turn my ankle (excoriating) and have been limping about the house with a wrapped up ankle. But it was not serious and I will be fit enough to uncover the works tomorrow. So all in all, an eventful few days.

Because it is clear that I will not be working on the Megado for a week or two, I am working on a new project on the Schacht. I am taking the opportunity to use some of my stash. This time 2 skeins of  cashmere from Just Our Yarns, space dyed in red and dark red. I am doing a variant  of a Bateman weave. 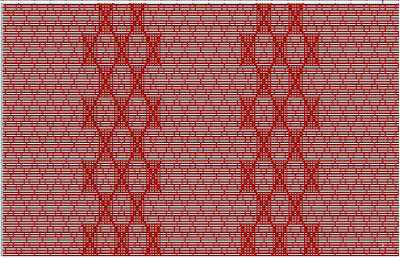 So now I need to wind the warp!

I am also about finished binding another book for The Bookbinders annual do in July. Called `Amusements in Mathematics`. And when that is done I shall start on a Coptic Book and a book, as yet undefined or designed but to hold one print of each lino-cut I have done in the last few years.