Friday and Saturday, Dorothy and I put the dogs into the dogsitter's and went off for the day. On Friday we went to Savill Gardens. Very good, immaculately kept. I wonder if the Queen goes round and says Weedy!! Because it is not weedy at all. The Rose Garden is past its best though a few were left. See below. They have two cafes - very nice 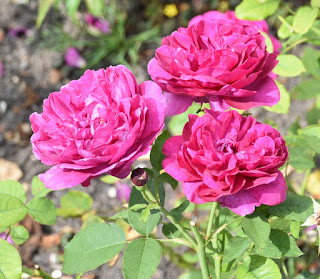 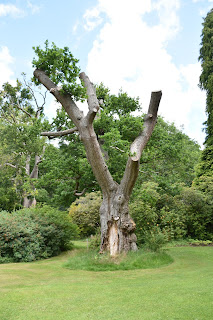 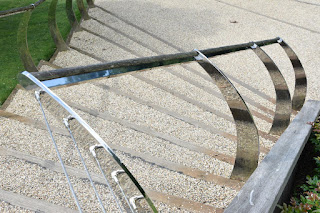 Afterwards we went to Hilliers Garden centre which is a mile or two away and had tea in their gorgeous café which looks out over fields. The garden centre is equally gorgeous but then Hilliers has been around for a very long time. My husband would not patronise anyone else  and he was always ordering raw and exotic conifers and maples. But we had a sizeable garden then. When we wnet in we said to each other, No buying plants. I should have known better. WE came home with a lovely hibiscus!!

We were less than  30 minutes drive from the dog sitters. So not so tiring as I expected.

On Saturday. back to the dog-sitter and then by train to London Victoria  and on foot to Buckingham Palace and the Queen's Gallery where they had an exhibition of da Vinci drawings. She owns 500 of his drawings and 200 of them  were on display. The big problem for me was that some of the drawings  were very faded and the light was very low (conservation). But all in all, a good day. I was interested in the modern buildings on Palace Road, very avant garde and I wished I had taken my camera.

On Sunday we had a restful day. I was worried as I have not done too much exhibition viewing since last November but I seem to have survived. And today, I must do a few tasks, like weaving. I have discovered that you can buy perfectly adequate picture frames from Ikea and have been framing some of my lino cuts. I  have bought several frames and have only one left to do.