The Schacht - at last

I have been working on the Schacht over the last two days. Tied up the treadles and started weaving. Of course there were problems - until I discovered how to fix the back beam by tightening up the spring. Very easy to weave on though it is many years since I last wove on a floor loom. I keep trying to cross my feet and spend a lot of time checking that I have my foot on the right treadle.

The biggest problem is something quite different. Because this was a trial, I looked for something in the stash and found three lots of merino and silk left over from other projects. There was enough to wind a three metre warp. I wanted to use a plaited twill and warped accordingly. The three colours were pale blue (space dyed by me), pale lavender and a mid blue. So I wound the warp two colours together and moved from mid blue at one end to pale blue at the other. This was a mistake with plaited twill which needs a dark and a light and no variations in colour. So I tried  a bit of the pale and mid blue. No use. One end shows up the pattern and the other end does not. I tried a cream silk, a lovely yarn and I do not really want to use that up on this trial project. It worked in that the pattern showed up across the warp but it looked horrible.  I had thought I would use a brown chenille but when I investigated, the yarn varied between dark and light brown and that would be a mistake. So I went hunting in the cupboard and found a whole cone of brown Shetland, nice stuff, and that works!!! 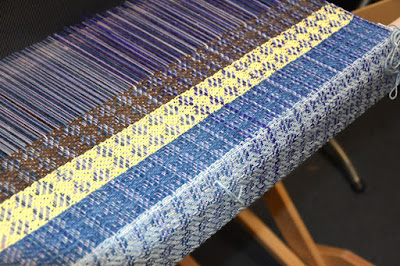 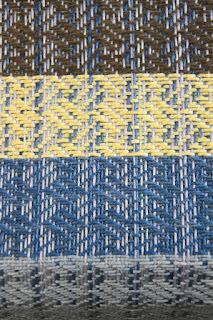