I am surprised I am still vertical. Recording things as they happened this week. On Monday I had a man round to design a fitted unit in the studio to use the space better. The design is great. I had vaguely taken on board that I would need to clear some stuff away but sort of envisaged piling it in corners as the new units only take up only wall. Not a bit of it. Everything has to go somewhere else. And waving a hand at the Megado, he added 'And that will have to go'. I made it plain that the Megado was a fixture and his men would have to work round it. A concession by me was saying I would remove the electronic unit from it. While he was busy drawing up the units, there was a loud bang , followed by the removal of power from the top floor. That bit was easy to deal with since we now  have modern trigger switches. But the death of the desktop was another matter. So Wednesday saw me in Reading buying a new one. And Thursday saw it activated. Things have improved a lot. It took two and a half hours to get it functioning. But another 24 hours for Dropbox to transfer all the files. However they are all there - except one  and the hard disk from the old one can be searched for that.

What else? Well I have posted a load of photographic exercises on my course but am having trouble with the current one. You can imagine me clutching tripod and camera at sunset and tramping through long grass to find a suitable view point. The vew was not very good and the photos were poor so I will have to spend the weekend sorting that out. I am running slow and the College has written me an email saying so.  I did go to Germany and 'waste' two weeks at the beginning.

What else? I never said that the book on Fan Reeds has been published and I have a copy sent to me by the American publishers. Today a second copy arrived from Manchester. This threw me and I rang them. They tell me it is a review copy and it is free. Who I am supposed to be reviewing it for, I do not know. Unless I hear to the contrary, it will be someone's Christmas present. I have written a few pages of it. 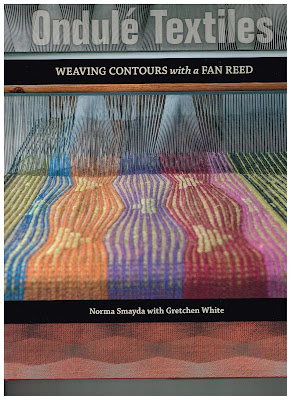 Oh and one last thing - very important. I have ordered a Schacht Mighty Wolf with all the bells and whistles as recommended by Rosie Price. But I have asked that it not be delivered until the first week of January. I do not want another large object cluttering the house up until the new units are installed. Anyone want a Louet Kombo with loads of extras plus a fan reed attachment? Going cheap. Quite old but still very functional. Oddly enough not buying a TC-2 makes one feel quite rich! Hence new unoits and a Schacht. My only excuse is that I have wanted one since I saw one at Barbara Walker's class for weavers many years ago. It was owned by Suzy Gough. Last time I spoke to her, she still had it.