I reached home at about 1700 on Friday and collapsed in a heap but next day Open Studios started and we were open over the weekend. Lots of visitors came and we chatted happily. But it has to be said that other things did not get done. And then on Monday (Bank Holiday) we were both stewarding at the Open Studios Exhibition at Greenham. Hard work. Loads of people and I learnt a lot. The most of which was that Open Studios is really devoted to  painters. The visitors walked straight past the lovely ceramics (which are the best thing in the show) and the jewellery and the textiles and di not look at anything else. Dorothy and I each had a wall hanging which were basically hidden.

So without too much thought we have decided not to do it again. It has taken us weeks of effort to put everything together for opening the studios and now it seems like a waste of time. Never mind, I reckon both of us have Christmas presents for family and friends for the next two years. 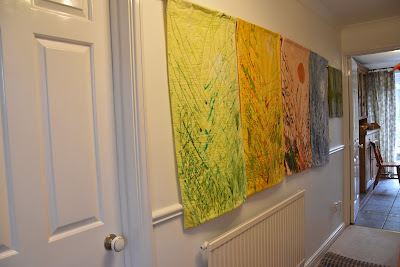 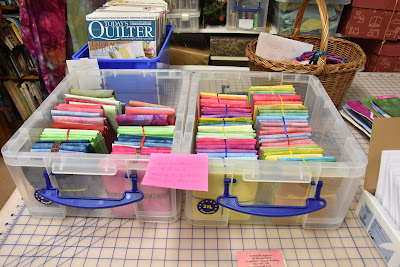 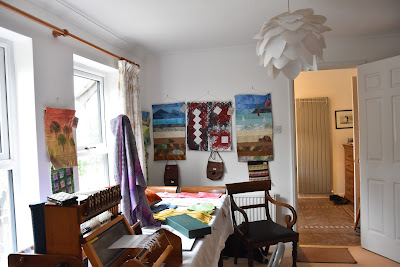 I arrived home from Greece to be reminded that this year I am in charge of some of the Bookbinders bursary applications and the deadline was last Sunday. So in amongst everything else, I have scanned in the applications and bunged them out to judges. I myself intend to read them thoroughly this evening sitting in front of MASH.

The other point to note is that I have wound a great deal of the warp for Complex Weavers but have more to go. There are two warps and one is early finished. The other one is multi-coloured and needs a bit of thought - - - which I will go off and apply now!!
Posted by Pat at 17:49