Lori Sauer is a bookbinder who lives near Salisbury and runs classes. She is a bit of a special bookbinder since she is President of the Designer Bookbinders. However this blog is about her bookbinding skills but about her course on a leather wallet. Now this is not a money wallet but a tool wallet, in other words, a holder for small bookbinding tools. It was held in a bookbinding workshop and there were nine of us, including Cally Booker. She came, not that she did not want to come, because I was regarded by the family as a liability but life got very complicated. I had an urgent appointment with my surgeon as things were not looking good on the first day of the course. It was a two day course. So l lost half a day but I had got well ahead and we went an hour early on the second day which meant   I had caught up by 1000 hours.

So a few photos are shown below. 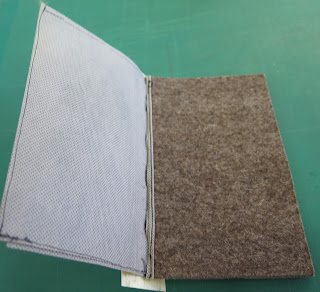 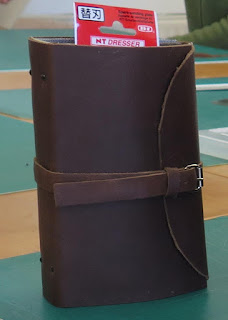 The top photo is the centrefold with a thick felt sheet for needles. Everywhere there are pockets. The height of the wallet is 19 cm (7.5 inches). I am pleased with it. Cally and I were discussing whether it would be worthwhile to make one for weaving but decided there were not enough small tools to be worth it.
Posted by Pat at 17:39