The Ikat Warp Day went well although I took only one photo. This was because every time I looked round the room, all you could see was people with their heads down over white yarn with raffia tied round it! Not very photogenic. We decided in the end that wrapping clear plastic round the yarn and overtying it with raffia would probably work and it did. 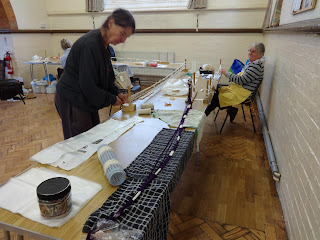 A picture of the Ikat class with Mary Jarvis and Marie FitzSimmons. The burgundy and white warp in the foreground is Marie's.

I had wanted everyone to do something simple to start. In the end everyone did something much more ambitious which required a great deal of tying up. It all took so long that we were putting the last warp into a dye bath at 5 o'clock. You could tell the class was absorbed by the silence in the room - punctuated occasionally by muttered curses as something had to be undone. On the way home I had an idea about what to do with my own warp and I was tempted to start at once today but no, I will be good and deal with the huge amount of paperwork that has built up this week while I have concentrated on textiles. 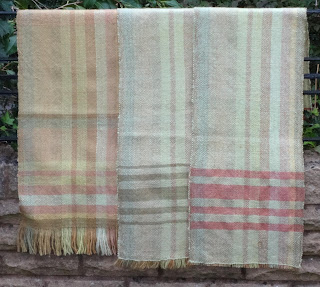 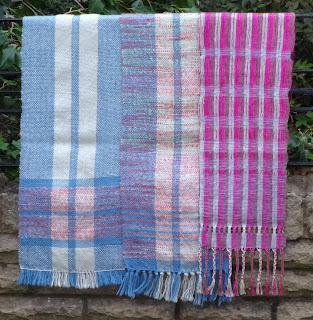 Two wool scarves on the left and a bamboo/cotton scarf on the right.

The other thing that has happened is a new objective! Someone asked me what I was going to do to top the Silk Route and Africa and I said I was staying at home till next July. Not true any more. My elder daughter, Ruth, is having a special birthday in early January so we are all going to a nice house in Dorset to party for a week at New Year. My younger daughter, Anne, who celebrates a similar birthday in 2015 has organised that everyone shall go to Cropready which is a folk festival. Anne and her family attend every year (Alice Cooper was there this year and caused uproar). She was a bit concerned about me but I pointed that Cropready could not be worse than camping by the Aral Sea. At this point I realised that I had a very special birthday just after Anne's and said that I wanted to walk Hadrian's Wall but really I wanted to walk the Pilgrim Way to Santiago del Compostela in Spain and Ruth said that she had always wanted to do that. So all of a sudden some of the family are doing that next Easter. It requires an ability to walk 10 or 12 km per day so I have to get very fit in the next six months which is no bad thing. I have decided I need to make  a list of the things I really want to do/see/experience before the insurance firms refuse to take me on.

Opera at Milan/Bayreuth/Dimitri anywhere/Palmyra (I believe there is a slight problem with Syria at the moment)/Bali/HongKong. That will do for starters.

Now for the paperwork.