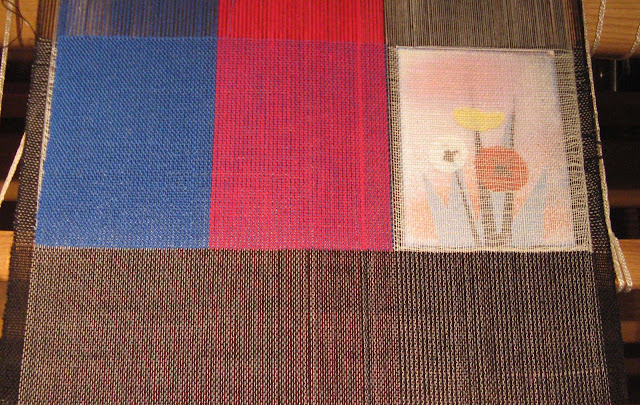 This is a practise piece for Michael's enamels on the Megado. It is triple cloth with warp and weft interchange. One warp is 60/2 grey silk which is the front of the pockets (one to a row) which hold the enamels. The back of the pockets is the second cloth and is  always black 16/2 cotton which nevers appears on the front. The third cloth has a warp of 16/2 cotton in blue, red and white stripes. While the warp and weft of Cloths 1 and 2 are the same, the weft of the third cloth varies. The above photo shows the first section which has a blue weft. There is also a black border on each side which was originally only woven with Cloth 2, the black cotton. It uses 20 shafts, 6 for each of the three vertical stripes and two for the border. The sett for all yarns is 24 epi and the ppi is teh same. This makes the grey silk semi-transparent.


All sorts of things are wrong. The inclusion in the right hand pocket is  a fullsized copy of an enamel printed onto thick paper. And it looks okay BUT!!! If you look at the left hand edge, you can see a sliver of the grey silk behind the blue because the blue has a free edge and it is showing 'draw-in'. So I shall insert some 'stitching', that is, picking up the black cotton. I ran into this problem with the  grey silk but changed at an early stage to a liftplan which included the grey silk in the border. I do not want to include Cloth 3 weft in the border because I want a nice plain monochrome border to match the top and bottom so I will have to add in some stitching.

There will be three rows, each containing two woven plain rectangles of different colours and one grey silk pocket containing the enamel.

The other problem which is potentially much worse is that I cannot weave the final piece as I originally thought. The current practise piece has a bottom edge which is 2.5 inches of two cloths separated everywhere, that is, Cloth 1 and 2 have been woven in black cotton and Cloth 3 with a red weft. The idea is to cut short Cloth 3 and fold Cloth 1+2 over it, then machine stitch it to make a tidy  border. A dowel rod will go in an identical pocket at the top. Well maybe with paper in the pockets, it will but not with the enamels in. I am short of space between the reed and the breast beam for that. I cannot roll an enamel over the   breast beam. I think I can gain another inch or two by stuffing a towel over the breast beam. Whatever happens with the practise piece, for the final piece, the woven bit to start with has to be the top and the last part woven has to be the bottom. This is do-able - I think - but the bottom edge will not have a proper hem.

Weaving is quite slow as I have three shuttles to wield. It takes me more than one hour to weave the length of a pocket which is four inches. I have woven the second row and inserted the second picture. I want to put in all the liftplan changes and finish it off. I am not sure yet whether to make another practise piece, I might. I deliberately put on a much longer warp than I needed.

Life has got complicated by internal problems surfacing and I have not been sleeping well because of the pain. Eventually I was driven to consult the GP who provided some medication which has got rid of the pain completely. The result is that the last two days I have been livelier than for some months. The complication is that I am to have an internal inspection, which I hate and I just hope they don't find anything which calls for a stomach operation. I have had two of them and don't think much of the prospect of a third.  Not to mention the interference with my holiday plans for next year.

The last two days have seen all the Christmas cards finished and posted as well as the last presents wrapped up and posted. And lists of things to do before Christmas have been generated. Off to revise the liftplan