In writing a talk on the History of Looms, it occurred to me to wonder what working with an early loom would be like so I built three.

is the simplest of frame looms. It is made from a canvas stretcher and the warp is just wound round it. This means there are two sets of threads, one at the front and one at the back. In 7000 BC, this would have been four branches lashed together with 'string' which might have been the stem of a twining plant or an animal sinew or fine strips of leather. The height would have been five to six feet and the width 3 to 4 feet. I used handspun wool dipped in indigo for the warp and weft.

The warp is wound in a continuous thread round the top and bottom struts. 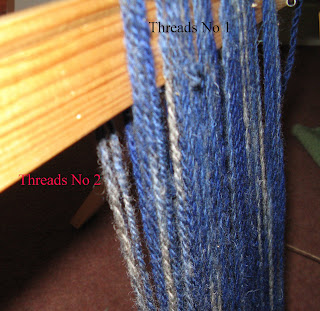 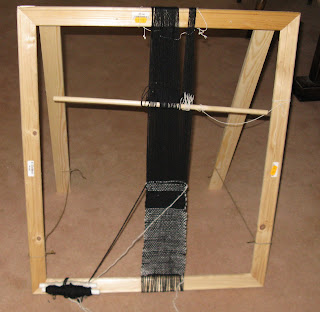 Loom No 2. This is like Loom No 1 with the addition of a lease stick which is the horizontal piece of dowelling about one-third down the frame. This has a continuous length of string which loops round each thread in the rear and then round the dowel. The yarn is natural black handspun. 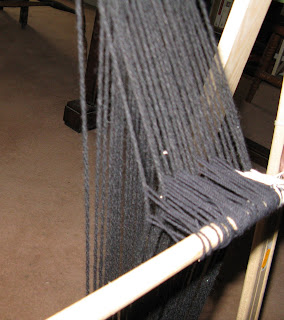 When you  yank hard on the dowelling, pulling it forward, Threads No 2 come to the front, leaving a nice large gap to insert a shuttle. This is a vast improvement on Loom No 1 and weaving can be quite speedy. I had to experiment to get the lease stick right, both in the looping round the back threads and how much string to allow in the loops. I re-did the lease stick four times before I got it right!

Loom No 2 has some defects. Firstly the length of the warp is fixed by the loom structure and is limited. Secondly it is quite difficult to keep a uniform tension with this way of putting on the warp. But the loom, often called a frame loom, was used a great deal and would have been about the same dimensions as Loom No 1. The Ancient Egyptians wove fine linen on frame looms used horizontally (Meketre's tomb) and I have seen a horizontal frame (1990s) used over a dug out pit in India to weave a single blanket at a time. The example that weavers will be most familiar with is the Navajo loom. I am indebted to Sally Orgren of the USA for these two photos. 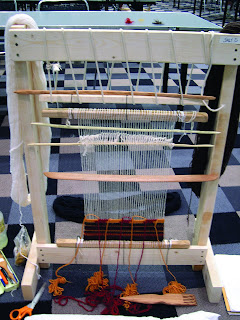 The lease stick is visible as is the 'weaving sword' which is the curved length of wood nearest to the weaving. This is inserted  into the shed and turned on its edge to provide a bigger shed. 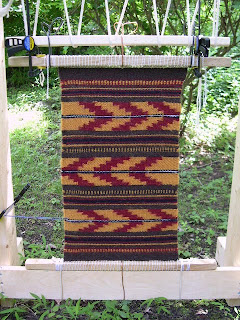 Here is the completed Navajo rug

solves these problems but, of course introduces its own! This is a Warp Weighted loom. The warp can now be as long as you like.  Threads No 1 are placed in front of lower crossbar and weights are tied to them. Threads No 2 are placed behind the lower crossbars and have weights tied to them. Lease sticks are used (the horizontal dowel) and you weave from the top down.  The warp threads are secured and spaced correctly by preparing a 'headband'. 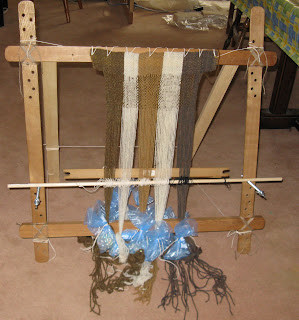 General view of Warp Weighted Loom. The lease stick rests on two supports (M8 studding with wingnuts on the end. Well, neolithic woman would have preferred Radio Spares any day). This device supports the lease stick when weaving with Threads No 1 in front. The weights are plastic bags full of glass marbles and each weighs 100 gms. Originally these were stones with holes drilled in them or baked clay lumps with a hole through them. After a fire, the rest of the loom which was of timber would be destroyed but archeologists can see a row of stones or clay lumps with holes in them, which indicate that a loom stood here. The Museum in Edinburgh has stone weights from Orkney which show the characteristic wear pattern of grooves. 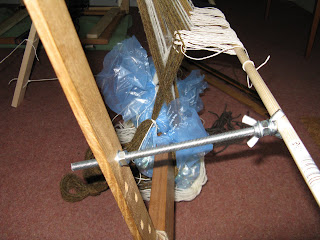 Lease stick in operation, The lease stick is yanked forward and parked on the wingnuts to hold Threads No 2 forward. 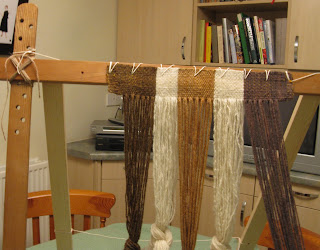 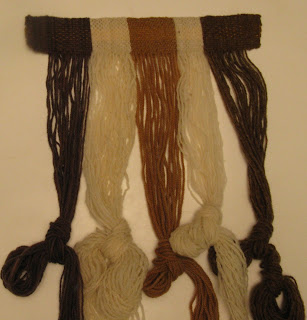 Headband. The warp runs horizontally and every third weft is pulled through in a long loop which is fixed round a post clamped some distance away. This would have been done in finger twining techniques or using tablet weaving or an inkle loom,


The lease stick took some sorting out. Because Threads No 2 hang vertically downwards and Threads No 1 go over the lower crossbar, there is much more distance between the two sets of threads. You also have beat upwards since you start weaving at the top. The big mistake I made here was in the choice of yarns, the brown and yellow yarns are handspun quite tightly plied and tied with natural dyes. The white yarn is very loosely spun and one thread was not inclined to pass another without giving it a hug.

When enough of the warp has been woven, the top crossbar was untied, the woven cloth was wound up round the top crossbar and then it was retied. This removed the length restriction on the warp. Weaving on the warp weighted loom was developed by the ancient Gauls and Germans who made much use of twill and natural dyes in their woollen clothes. In the Textile Museum at Neumunster, Germany, there is a fine replica of the 'Thorsberg mantle' (found in a German bog and dated to 200 AD). This has a checked pattern like tartan but done with woollen yarn dyed with three shades of woad.

This loom was the work-horse of European weaving for many millenia but was eventually superseded by the horizontal loom with shafts and heddles that we have all learnt to love. A lovely example of a warp weighted loom is shown on a black and red Greek vase of 560 BC in the Metropolitan Museum of Art.