I took a bus tour to Keukenhof and we did pass through some bulb fields although the tulips are not out yet. All very grand, totally free of weeds and redesigned every year. There are several enormous greenhouses. One full of orchids, one full of flower arrangements and one very large with early tulips in it, not to mention daffodils, crocuses, et cetera. A bit spoiled by a nasty icy wind. I took a very large number of photographs, including one which is worthy of the camera club. What was interesting is that 95% of those present were only interested in selfies against a few flowers. Not at interested in the flowers themselves. The other 5% had monster telephoto lens and were into photography as art. I have to admit that even I got down on my tummy to get close ups. A bit of a struggle getting up again but what does it matter if you look ungainly. 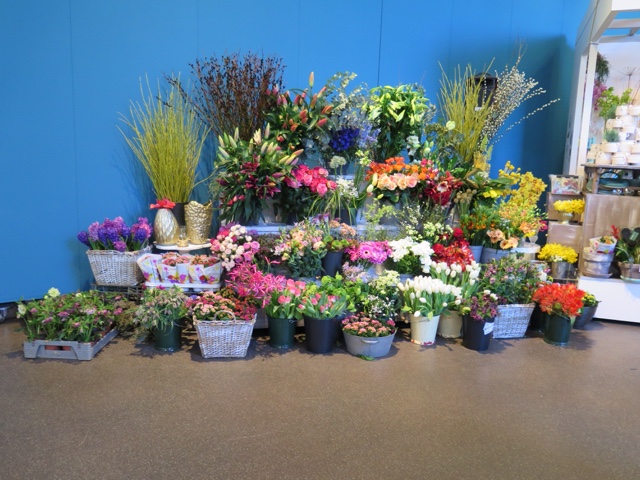 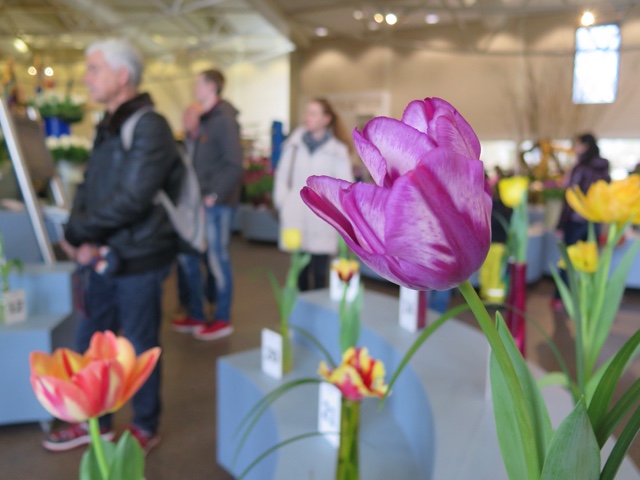 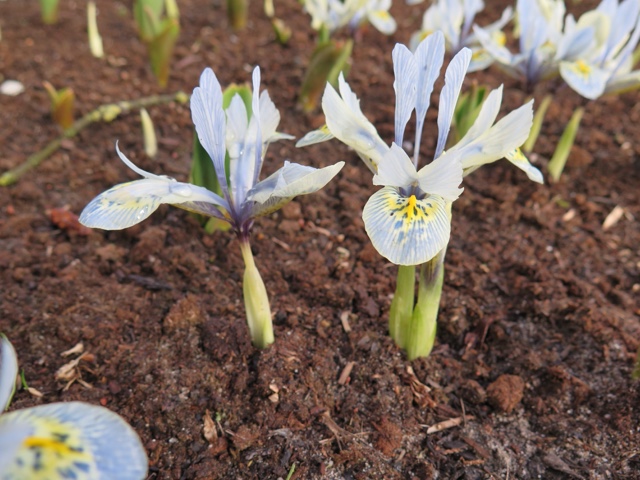 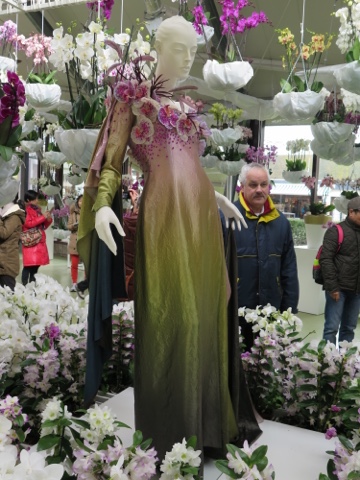 Friday evening was spent listening to St Matthews Passion. An amateur choir and rather bigger than I like but well done. Came home after 11 pm in an overcrowded tram to find the house in darkness. Everyone else was in bed!
This morning was spent on a boat trip round the harbour and canals. 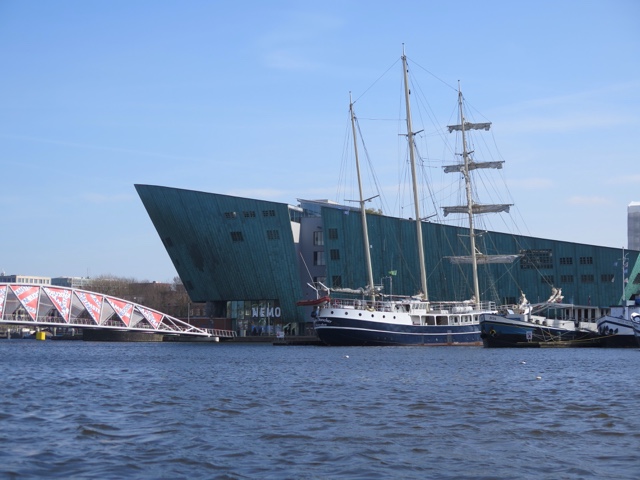 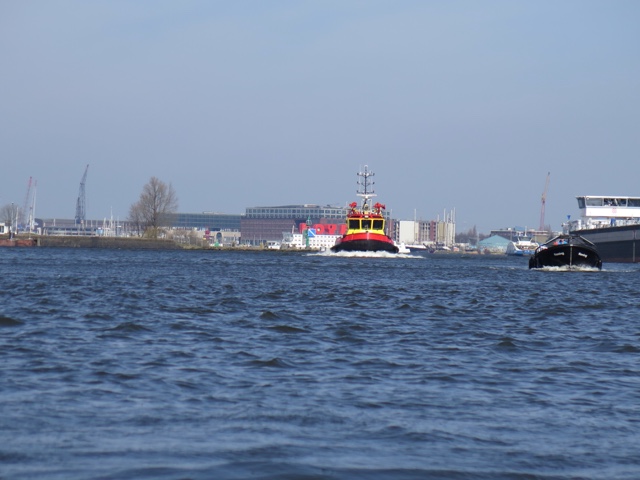 And then lunch in the Chinese quarter where they went in. For large platefuls. This is what I got when I ordered turbot. Tasted good. 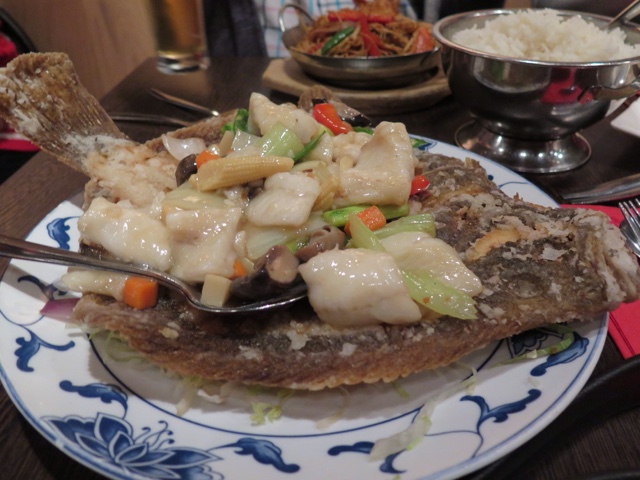 Then I went off to the Troppenmuseum to look at Indonesian textiles only to discover that they have put away the native textiles and are celebrating Holland's colonial past. Memsahibs  in tea gowns, sahibs in topees.
Posted by Pat at 17:58 No comments: 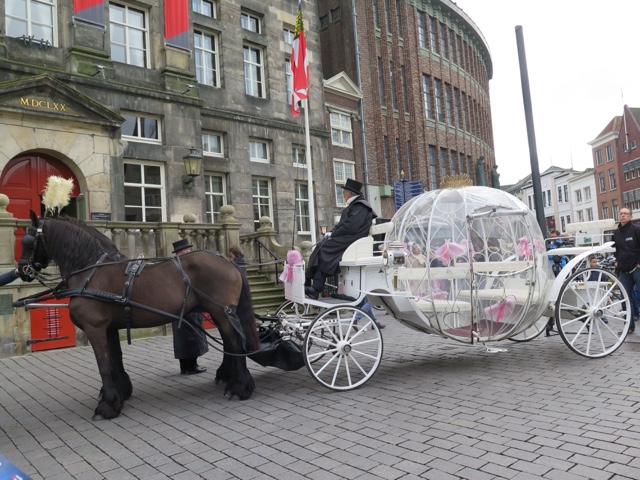 Seen in hertgenbosch outside the Town Hall, waiting for the bride and groom.
On Wednesday, we travelled to Amsterdam, we being my daughter, Anne, and her family and me. She had rented an apartment on one of the central canals. However it is approached by four long flights of ladder like stairs, at the end of which I need to sit down for a bit and a lot of the last few days have been spent minimising the climbs.
Yesterday was spent walking around the city getting our bearings and visiting the Rijksmuseum. The Night Watch is still there as are the four exquisite Vermeers and an armful of Pieter de Hoogh. In the evening I took everyone to the Five Flies which was one of Michael's favorites. It is three canal houses joined into one, still with mediaeval timbering and doors and embossed leather on the walls. Lovely food, much enjoyed by all.
Today was why we came. We took the train to hertgenbosch where there is a huge exhibition of Bosch's work. Timed tickets and they sold out weeks ago. They sold too many tickets as it was very overcrowded. But it was first rate. A lot of drawings. Like most people I think of him as monsters besetting Saint Jerome. But his Three Magi is beautiful. And people are always varied. Look at any of his crowd scenes. I had a look at the books on sale. The best one weighed too much to be carried around so Amazon will get my trade for this. But we did patronise the market. 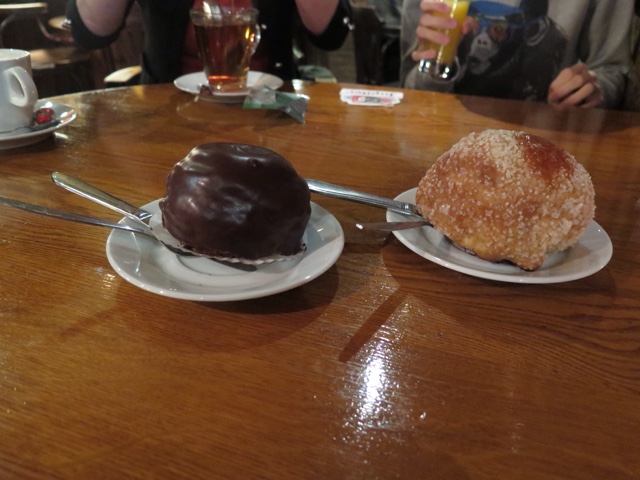 The local delicacy in Hertgenbosch. On the left a chocolate ball, filled with cream, sickly, on the right a pastry case, filled with one large cooked Apple, delicious. 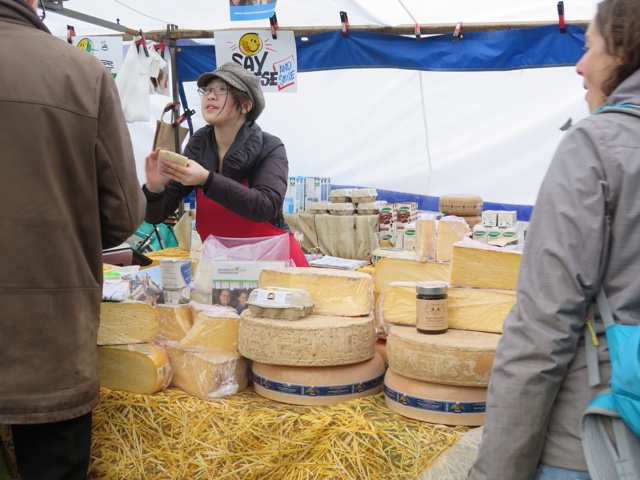 The cheese stall was delicious. How do I know? The stall holder saw we were interested and gave us samples. After which the only question was How much can we carry? 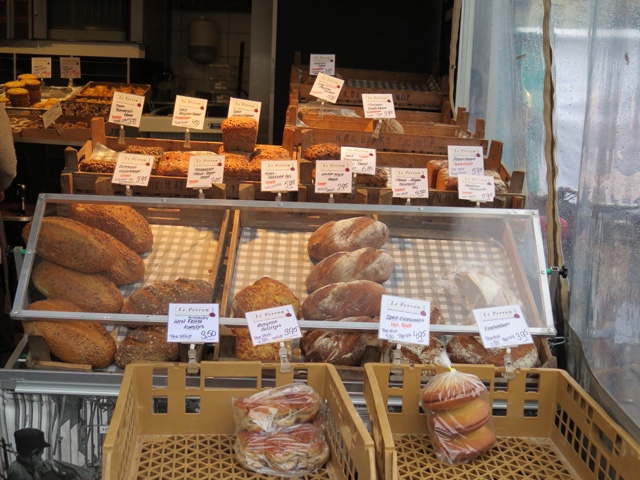 And then there was bread to buy to go with the cheese.
Of course there were the seven fish stalls 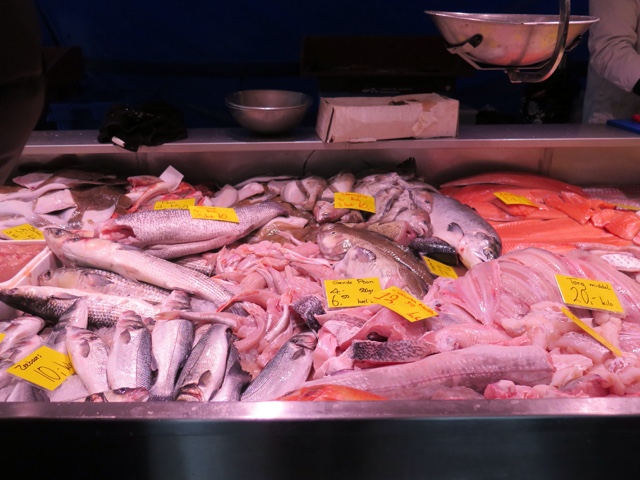 And the stall loaded with nothing but mushrooms. 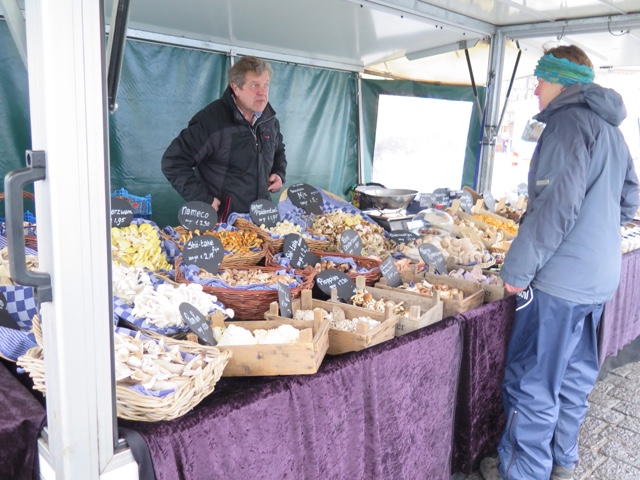 We took the train home, happy bunnies. This evening I have a ticket for St Matthews Passion at the Concertgebouw. We spent the last three weeks of the Bach course studying that. I am pleased. Mind you, I think it is an amateur choir. But let us not be picky on Good Friday.
Posted by Pat at 17:17 No comments:

I have been busy lately, finished the piece on the Kombo for the fan reed book, got on with tidying up and preparing for the operation. You might think I was frittering my time but I have had a good time. Last Saturday I went to an exhibition on sewing in the big exhibition halls at Birmingham. I went with my daughter, Ruth, and, of course, we bought lengths of material we did not really need. I must get on with my red velvet cardigan jacket and in deed I tacked everything together today. On Sunday, I took my grandson, Alex, to the Photography Show but it was a waste of time. The show was aimed at professional photographers. Hilarious stands! Several devoted to selling props for photos of very new babies. Ditto for weddings. Quite a lot of fancy holidays including safaris. But basically boring.

But as Alex told his Mum, we had a great time sitting outside Hall 1, watching the attendees at Comicon, see below. Lots of people obviously come dressed up! 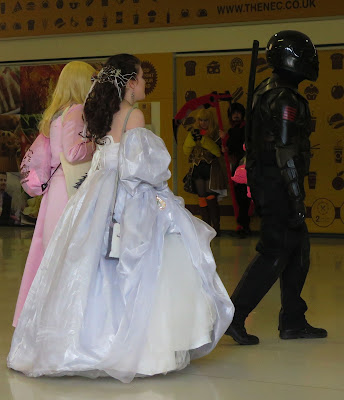 Today Dorothy and I went to Wisley, saw lots of desirable plants, bought some and came home happy. 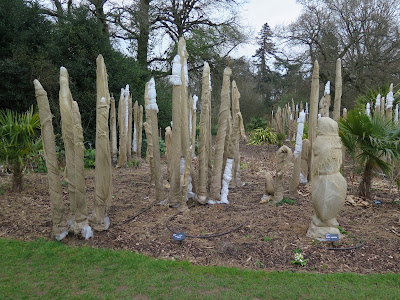 These are wrapped up banana plants. Quite scupltural

I have emailed off the last inputs to the fan reed book. I feel as though I am burrowing through the mountain of deadlines although I somehow made time to do some dyeing with Procion MX. I folded and clamped two silk scarves, then dyed them. Three cotton T-shirts were dyed using ice dyeing. This method suffers from the defect that all new techniques suffer from.  I cannot even  begin to guess, what the result will look like! I shall be over dyeing the yellow Tshirt with blue. 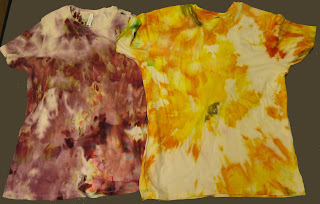 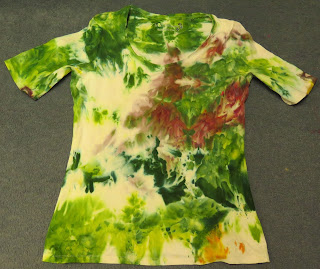 Today I took a day off to go to Slimbridge with my daughter Anne. A lovely sunny day. But the place had got  so muddy that they removed a lot of birds so the ground could recover, leaving a lot of pools empty. I did get some good photos. 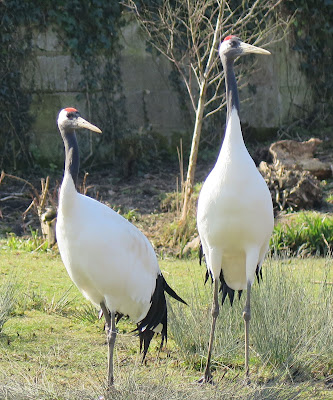 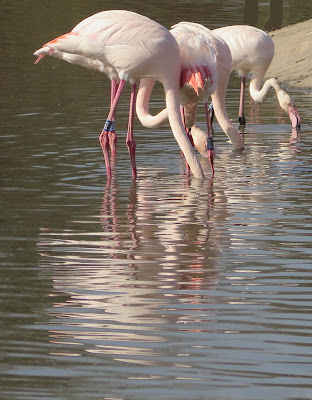 Tomorrow, I am teaching Japanese bookbinding in this house which is a new one for us. Dorothy is going to be teaching Procion dyeing to a class here in April.

More on the Fan Reed

I had a response on my blog from Lynn who lives close to Worcester Polytechic Institute and has very kindly offered to visit the library for me. So I have summarised what is needed and await agog. Whatever turns up will be a surprise. And I am so grateful to Lynn. I had started wondering about the cost of planes to Boston!

I have got the warp on the Kombo, threaded and nearly sleyed. Tomorrow I start on weaving!

Various other important things have happened. The crucial item affectingh the future is that my long threatened stomach operation is in three weeks. I clearly am going to be out of action for several weeks and there are several deadlines which must be met before the end of April. Firstly I am going to Amsterdam to see the Bosch exhibition - - and Amsterdam of course. Secondly the Fan Reed book for Norma Smayla. (I bet she is pleased about that!!). Thirdly the garden which needs a lot of attention. So I have sent for the gardener.

I have spent all day reorganising my diary and rescheduling appointments.

The best bit I have kept till last. I had an email from HGA last night. They have accepted my yardage for the Convergence exhibition. I am pleased because I rather like it.

I nearly forgot about the photos. My camera club selected one of my photos as one of six to be entered for ab inter-club competition. I attended the judging laser night and was pleased to get a high mark 9 out of 10. Here it is. 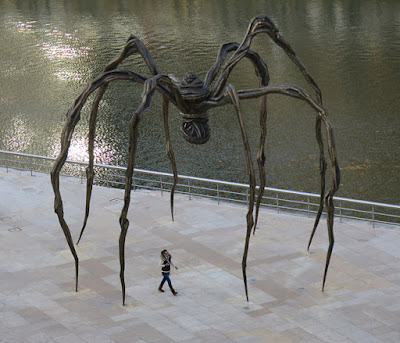 I have been working hard on my input to the Fan reed book by Norma  Smayda Staley. I have sent in the section on the mechanics of my fan reed. Last night I found myself in Leamington Spa with a spare evening and spent it  in writing up the other two sections, on the history and on my weavings with a fan reed. The history is distinctly dodgy. I have completed the European/American section and am now dealing with Japan which has a language problem!

One thread I am still pursuing but have been really unsuccessful are the archives of the US loom maker, Crompton and Knowles, which I have tracked down to Worcester Polytechic in New England. It is all in the Gordon Library and, if you search the website very carefully, you can find a list of the archive contents. But they have not been digitised and the librarians do not appear to bother answering emails from foreigners. Woe is me!! The trouble is that I do not feel like paying out for a trip to Boston when I am not 100% sure there is anything there. Bah!! And yet I am sure there must be something  relevant in there.